* Policemen are institutionalized to fear Black men
* Every day, I fear that my husband, a Black man won’t come home because of NYPD
* We need a national movement against police brutality

A few hours after three New York City police detectives killed 23-year-old Sean Bell and wounded Trent Benefield and Joseph Guzman on November 25, 2006, my husband, a Black man, asked, “If the pigs murdered me, do you really think you could get justice?”

Last Friday, in a country where beating and killing a dog gets you a 23 month sentence, Judge Arthur Cooperman ruled that those three detectives who fired 50 bullets (four killed Sean Bell; 19 and three hit Guzman and Benefield, respectively) at an unarmed Black man on the eve of his wedding were not guilty and free to walk our streets.

Nicole Paultre-Bell, the victim’s fiance ran out of the standing-room only court room. Valerie Bell, Sean’s mother, fainted and had to be carried out. Guzman and Benefield broke down crying. And once outside, Sean’s father, William Bell, said quietly but forcefully, “We will shut this city down.”

So, two years after he asked, to answer my man’s question, No, I couldn’t get him the justice he deserved. In the United States of America, there will never be justice for Black or Brown men when the police are their murderers.

Every day, in the back of my mind, I fear that my husband (whose name is Justice) won’t come home. I fear that some trigger happy policeman who is institutionalized to fear Black men will murder him, think up a justifiable reason and the system will pat him on the back and say, “That’s all right. Justice deserved to die.”

My family and I, like the Bell’s and the Paultre’s, will live through months of protest, rallies and petition signing to get an indictment-which is not guaranteed. There will be a trial and the prosecution will be ineffective.

The defense will bring up my and my husband’s past arrests-as they did with Benefield and other witnesses-and say that because we were not law-abiding citizens, we cannot now be trusted. And the judge will blame the victim, just like Judge Cooperman did when he cleared those detectives of all charges.

The Sean Bell case happened in New York but everyday in the USA, police harass, brutalize, set-up and murder young men of color.

We must launch a national movement against police brutality. Justice will not come from a federal probe and investigation, as some civil rights groups are now calling for. Justice will only come when we the people not only demand, but fight for it.

“Power concedes nothing without a demand. It never did and it never will. Find out just what a people will submit to, and you have found out the exact amount of injustice and wrong, which will be imposed upon Them; and these will continue till they are resisted with either words or blows, or with both. The limits of tyrants are prescribed by the endurance of those whom they oppress.” 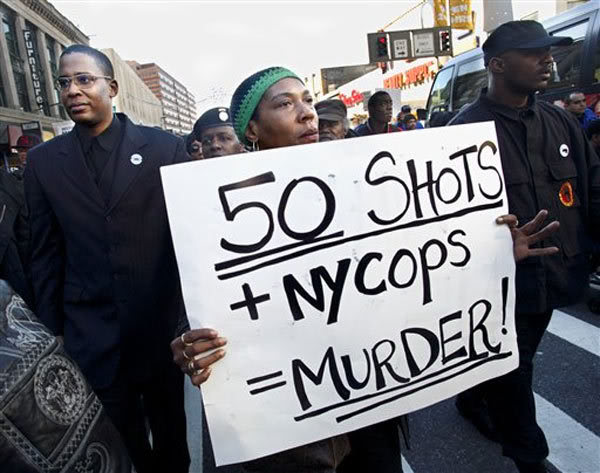