Puerto Ricans Demonstrate How to Oust a Corrupt Leader 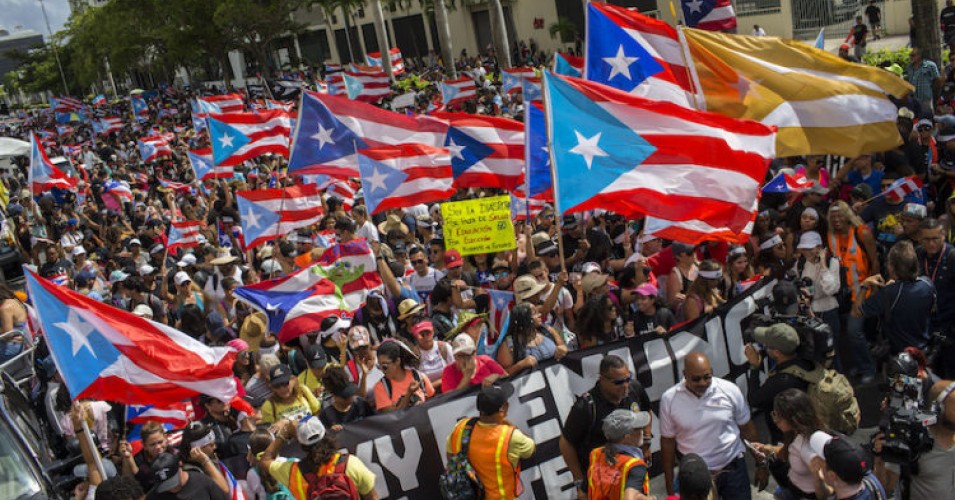 Read the article on Common Dreams.

The movement that forced Ricardo Rosselló to step down as governor of Puerto Rico is one of the largest in the island’s history. It unified people across the ideological and political spectrum toward a common purpose: ending the governor’s corrupt regime. On Monday, hundreds of thousands of people gathered in San Juan to demand “Ricky Renuncia.”

Traveling to her native Puerto Rico to witness what was unfolding, political activist and journalist Rosa Clemente told me in an interview that rumors had spread on Monday that Rosselló was readying his resignation. But then, she said, “He doubled down again by giving a horrific interview on Fox News, and that made especially young people more angry and agitated and ready to stay in the streets.” Rosselló told Fox News’ Shepard Smith that while he wouldn’t seek re-election, he also would not resign on the same day that half a million of the island’s people were demanding he step down.

Two days later, more news outlets began reporting that Rosselló was expected to resign later in the day. Some claimed that he had recorded a farewell message. But as the hours wore on, nothing happened. At that point, the Puerto Rican Legislature threatened to begin impeachment proceedings against him unless he stepped down. Hours later, when the day was nearly over, Rosselló finally conceded. He refused to step down immediately, offering instead to resign Aug. 2.

The thousands of protesters who had remained on the streets of San Juan erupted in cheers and lit fireworks.

How did Puerto Rico’s mass movement mobilize and emerge victorious so rapidly? The protests, which have been going on for two weeks straight, are incredibly diverse, involving Puerto Ricans from all the municipalities, young and old, unionized and unemployed, white and black. Clemente said she considered Monday’s march “historic” in the context of Puerto Rican resistance. “The six-lane highway we were on was packed as far as the eye could see,” effectively shutting it down to traffic. Cruise ships were turned away, the majority of Puerto Rican-run businesses in San Juan were closed, and restaurants handed out free food and water in solidarity.

This mass uprising was triggered by the publication of nearly 900 pages of private chat messages between Rosselló and his aides, discussing in disparaging terms the victims of hurricanes Maria and Irma, and making homophobic remarks about LGBTQ Puerto Ricans, including the wildly popular Ricky Martin. Among the chats—dubbed “Rickyleaks”–was a playful threat to shoot Carmen Yulín Cruz, mayor of San Juan. Puerto Rico’s Center for Investigative Journalism (its Spanish acronym is CPI) obtained the chat messages and published them online, sparking outrage among the island’s residents, who have struggled for years with a debt crisis, poverty, widespread corruption and nearly 3,000 hurricane-related deaths in 2017 that have yet to be properly acknowledged.

Read the article on Common Dreams.