[blockquote]    “We should be ashamed of ourselves. Rockefeller drug reform – ha! – I don’t think so.” – State Sen. Thomas Duane (D-Manhattan)[/blockquote]

While many are praising the recent reform of the Rockefeller drug laws, many more are not. Although the reform bill will reduce the most severe mandatory sentences for drug offenses, according to data from the New York State Department of Correctional Services, the reform change will affect only 446 prisoners, while 15,600 felons imprisoned under the drug law will remain imprisoned.

Even with the proposed revisions, New York still has the harshest drug-sentencing laws in the country. According to Donna Lieberman, executive director of the New York Civil Liberties Union, “Absent structural changes to the Rockefeller Drug Laws – which requires restoring to judges the authority to order treatment as an alternative to sentencing – we will not have meaningful reform.”

According to the NYCLU the new law will leave in place sentencing procedures that give prosecutors authority to charge and sentence.

Judges have no discretion over sentencing. Prosecutors can demand a sentence of 10 years for an addict with no criminal record who is induced by a dealer to deliver four ounces of a drug to a buyer. A judge who believes justice – and the public interest – are better served by ordering the defendant into treatment instead of prison is prevented from doing so. Even if the judge had the discretion to choose treatment, nowhere in the reform bill is there funding for drug treatment programs. The new law will also do little or nothing to reform the harsh sentences imposed on B felons, those charged with lesser drug offenses, the NYCLU said.

For example, an individual who is caught with a gram of a controlled substance, but has a prior offense still faces three to 12 years in prison. The majority of drug offenders serving time in New York prisons are non-violent B felons. Once again the hip hop community, the overwhelming victims of these drug laws, has been hoodwinked.

“It’s because of the artists. There’s no way that it would have happened without the help of Jay-Z and Puffy and all the people who contributed,” Russell Simmons told AllHipHop.com. “All those people really worked hard, they pushed, and it’s really the power of hip hop that made that happen. People came out, it was a big deal.”

Unfortunately, once again Simmons is wrong, and his praise of this reform bill has me questioning how relevant he and his organization are. By criticizing the so-called hip hop leader I open myself to attack, but ultimately I am more concerned about the impact of this sham and the 15,600 majority black and brown folks that will continue to sit in upstate prisons.

As someone who has been part of the campaign to repeal these laws – repeal not reform – I, along with many activists are uphappy with this compromise reform bill. Once again, our elected officials, who are supposed to serve the interest of the people, have pulled the wool over our eyes, and just at the right time. November 2005 is a huge election year in New York – what a perfect way to appease the electorate. Governor Pataki and other elected officials are up for re-election in 2005, and we should remember this betrayal when we go to the election booths. The governor and his Republican and Democratic cohorts knew they had to do something, and so they did nothing. 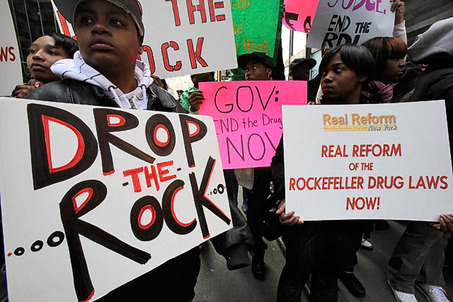 For over 20 years, activists like Randy Credico, Anthony Pappa, and Elaine Bartlett have fought tirelessly to repeal these laws. Credico, director of the Kunstler Fund for Racial Justice and an organizer of the group Mothers of the New York Disappeared, said in The New York Times that he is faced with calling many of the group’s members and telling them their children “are not coming home.”

In the last five years, Drop the Rock, a coalition spearheaded by Robert Ganagi and the Correctional Association of New York and composed of young community activists, veteran criminal justice reformers, artists, students, former inmates, politicians, and religious, civic and labor leaders has also worked hard to repeal these draconian laws. What happened in Albany was a disservice to all the people who dedicated themselves to this movement.

It’s time to dust ourselves off and dig into the trenches. We should no longer as a community be satisfied with answers that leave more questions. Amilcar Cabral, leader of the Guinea-Bissau liberation struggle once said, “Tell no lies, expose lies wherever they are told, mask no difficulties, mistakes or failures, claim no easy victories.”

We cannot claim victories that are not real. When Russell Simmons stated in The New York Times, “I am very, very happy,” we must ask, what is he happy about?

This story was published on Alternet.