Dead Prez blazed into hip hop in 1998 with the politically-charged single, “It’s Bigger Than Hip Hop.” Their Let’s Get Free album spoke about Black self-determination in a way no one else was doing at the time, in hip hop or out. They were signed to Loud Records, but got screwed when Loud closed its doors and DP’s contract was commandeered by Columbia Records, a subsidiary of Sony. Their planned studio album, “Walk Like A Warrior,” was shelved. After many delays, the studio album will hit the streets on May 20, 2003.

In November, 2002, despite the restrictive terms of their contract, an independent album, Turn Off The Radio, was put out on Holla Black Records under the name DPZ.

If you get the chance to see DP perform, do it, because they bring an amazing show. DP is made up of Stic and Mutulu “M1” Olugabala, and is part of People’s Army, a larger musical and political collective. Rosa Clemente sat down with Stic at his home in Brooklyn to break down the message in the music.

You guys have shirts that say “Pimp The System.” What do you mean by that?

There’s a lot of movements that are building for community or self-determination, community control over all aspects of our lives, from the land all the way to the education, etcetera. But we’re not there yet, because that’s a campaign that’s building. You’ve got to win masses of people to really make it work. So in the meantime… people are forced to work 40 hours a week, people are forced to do all kinds of shit, people selling pussy, people pimping pussy, people doing all kind of shit to survive. So the mentality that I see as progressive, that we try to put forth is, when you’re in these situations, understand these relationships and that it’s a pimp situation, and seek out ways to sabotage that pimping relationship. Seek out ways where you can abuse — if they put you on the register, you can get some extra change for your family. If they put you on guard duty, you can let us come get some TVs. You got to pimp the system. And that’s the mentality, not just in theory, but really that’s what we found ourselves doing to survive because the jobs and shit like that that they give us aren’t really for us to survive, it’s for them to survive. So in order for us to survive, until we get full independence, and self-determination, we got to pimp their shit, and milk it and use it. If you go to school, you can’t go to school so you can work to brainwash your people. You got to go to school so you can learn certain information, certain skills and use it to empower your community.

Do you think the government of the United States is failing?

I think it depends on what you think their job is. I think the government is on point with what they set out to do — set up a capitalist organization. I think the government, this system, fails black people, it fails oppressed people, the brown people, the red people. But I think this government works in the interest of the majority of white people. I think that’s a failure to human rights; that’s a failure to social development. In the end, that’s going to cause and has caused war and conflict and all of the daily shit we up against as far as poverty, drug abuse, trumped up incarceration, political imprisonment. All this shit is caused by what this system is designed to do. And it’s working.

You put out an album recently, Turn Off That Radio, on your own label. Is that album and releasing it that way part of a resistance to that system?

I hope that it can be helpful. At the bottom of all our struggles is the need for economics, so we got to do this music. I don’t think everybody has to use their musical talent, or whatever talent to say the same thing. I think there are people who’ve shown that they can be empowered financially or economically without talking about black self determination. They can demonstrate it, but their rap might be about shaking your ass — you know. Shit, that’s not the worst thing on the planet to do. For us, Turn Off The Radio is a sentiment and it’s really saying, they’re trying to program us with what to think, what’s cool, based off this system. And when we’re saying turn off the radio, it’s cause it’s reflected in the music, in the entertainment, and that’s a big weapon the oppressor uses on us. Whether you do that literally or not is not really the mission. But the mission is that you would recognize why somebody would say that, and where that sentiment is coming from.

Dead Prez and your crew, People’s Army, seems to be able to bridge the brothers and sisters in the hood struggling for basic food and shelter and the black middle class and college students. What makes you able to bring those communities together that sometimes because of class issues are divided?

Most of these things are responses to repression. Some people’s response to oppression is you got to go to school, you got to get a diploma, you got to get a degree, that’s going to put you in a better position so you’re not at the bottom of this shit. That’s some people’s response, like the bourgeoisie. Some people’s response is the white man is the fucking devil ‘cause look how he been doing everybody on the whole planet; we need our own language, we need our own culture, I ain’t wearing no Calvin Klein, I’m wearing a dashiki, whoop-de-woo, I’m celebrating Kwanzaa, fuck Christmas. That’s their response. Some people in the hood it’s like, I ain’t got no options, the motherfuckin’ police dropped this dope over here, I’m gonna sell this dope. I’m a be a thug. And these women got all the jobs and nigger ain’t got no job, so I’m gonna be a pimp. That’s somebody’s response to oppression. So, with DPZ, I understand that it’s all related to like Malcolm says, to the response; these are different attempts to survive. So instead of separating ourself, it seem like we can pull each other together by understanding that that’s all we trying to do. I have a belief in political education in the sense that if we can get a firm understanding of how we got in this social situation, it will unify people to change it.

But I’m drawn to the hood for a lot of reasons: how I was brought up, the environment I was brought up in. I didn’t never go to college. I was kicked out of high school. So I relate to what’s going on in the street, just from my uncles, brothers, whoop-de-woo — shit I was doing. I have more experiences than I have in a college setting, but I also have cultural experiences. I been exposed to Marcus Garvey, Malcolm X, being healthy, training in the martial arts, you know. With Dead Prez, we want to be something that black people can find as a link, instead of another attack on black people. We want black people to feel like, I’m being represented. When I listen and whatever these guys try and promote and put out here, they’re trying to include everyone’s concerns as best as they can, as two motherfuckers. And I want people to know that it’s bigger than me and M because, because of our experiences, we’re limited. And M, M1 — that nigger is from the hood and the nigger went to college, so he has a balance. That’s what enables him to relate and to recognize the significance of that sector of the population and be able to communicate. 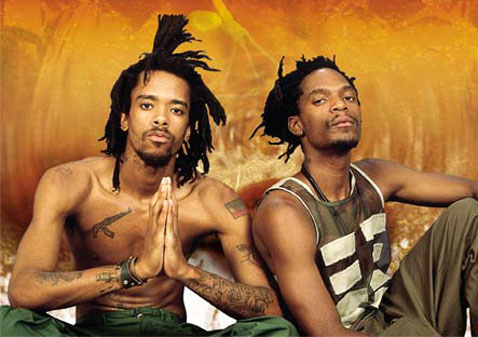 Dead Prez’s music, especially your rhymes, is very up front: it talks about conflicts with your wife, it talks about your drinking, what you were doing as a kid. What gives you the ability to be so honest and personal?

There was a time in hip hop where I used to write brag rhymes, you know: I’m the best MC don’t test me, whoop-de-woo, all that. And then people started saying, keep it real. That became a popular phrase. And I started saying yeah, I like that, I like that real shit. I started thinking about people, I don’t know if they were keeping it real, but things that was real life stories and occurrences — that shit made me say, yeah, if I’m gonna do this shit, that answers, that fulfills what I’m trying to do. I gotta write about the stress I’m going through. I’m inspired by people like 2Pac, his honesty with his mom on crack, whoop-de-woo. He putting that out there, that shit is therapy for him, and it let other people know that it’s not a skeleton in your closet, this is life. The ruling class wanna make a fantasy, but we’re dealing with conflicts and shit all day and if I’m trying to hide it, then I’m not trying to fix it. If I put it out there, I can probably get some answers and move forward. So it’s a strength. I’m not saying in no funny way, but it’s a strength to say what’s really poppin’. Put it out there so people don’t have no illusion. People think because you talk about be healthy you some guru on health — nah. It’s because I’ve been unhealthy a lot and I can appreciate being healthy. I don’t want to just start talking about health, I want to start talking about how unhealthy I done lived, so it can relate. That’s the whole thing. I’m trying to talk to real people about some real shit so I got to be honest enough with myself so you know that’s what I’m really doing.